Modernism, extremely popular in the 19th and 20th centuries, was the attempt to organise life in a universal, rational and scientific way. In architecture, this meant a focus on function, technology and modern materials, whilst rejecting traditional styles and what was seen as superfluous and wasteful ornamentation.

Not long after establishing itself in Europe, Modernism arrived in Malaya during the later stages of the British Empire.

Modernist buildings in Kuala Lumpur sport many of the tell-tale signs of the genre found throughout the world: clean lines, white walls, grid-like forms, the use of glass, concrete and steel, and a scientific method to organise space.

One of the first truly Modernist buildings, Rumah Persekutuan, was completed in 1954. The main office block of the building is orientated East-West to avoid the harsh sunlight. This allows the North and South facades to afford large glass windows, which also catch the breeze from the hill that abuts the building.

Today, Rumah Persekutuan houses the Office of the Director of the Land and Mines Department for the Federal Territories, and remains a good example of the transitional stage of Modernism, as it retains elements from previous architectural fashions. The long horizontal fascia lines on the façade are extended for aesthetic effect, an Art Deco flourish from that style so prevalent in earlier decades. The culture of ornamentation, by then out of fashion, was as yet not easy to discard.

As Malaysia’s Modernist tradition started just before Independence and continued into the country’s rapid development, KL’s iterations incorporated the histories and identities of a newly-independent, multicultural nation attempting to create a bold new vision for its future.

What could be more symbolic of the hopes for a free and representative government than the House of Parliament Building? A white tower nestled against a backdrop of the city’s western hills, this monument to democracy was completed in 1963. Functional and responsive to the needs of a tropical city, yet still beautiful, it sealed Modernism’s place as the official style to represent Malaysia’s birth as an independent nation.

The slender curvatures that give the Parliament its distinctive look is made of pre-cast terrazzo, a white concrete marbled with a grainy texture. This ingenious façade system responds to Kuala Lumpur’s hot tropical climate by providing shade to the recessed space within the glass-clad tower.

Perhaps one of the best-loved Modernist structures in KL is set in the country’s first and premier university: Universiti Malaya’s Dewan Tunku Canselor, easily one of the most beautiful Brutalist buildings in the country. Brutalism is one of Modernism’s many styles and, the DTC, as it is affectionately known on campus, features characteristically bare, unadorned and unpainted concrete surfaces. However, the overall effect is softened by its harmonious proportions and verdant lakeside setting.

When it was completed in 1972, many noted the similarities between the ceremonial hall and the Chandigarh Complex by Le Corbusier, the father of Modern Architecture. This inspiration can be found in the grand muscular tubes that house the staircase and the angular planes of the façade, known as brise soleil, on the walls.

Despite Le Corbusier’s dictum that “the house is a machine for living”, Malaysian sensibilities retained a strong sense of culture and tradition, which resulted in some unique fusions with modernist architecture.

Completed in 1965, the National Mosque is one of the first public monuments to be built after the creation of Malaysia. At the time of its completion, it was an entirely new way to conceptualise the Muslim religious building, marrying Modernist design with traditional forms.

The structure is almost entirely open-air and designed to create a comfortable prayer space flooded with natural light. The layout of the building is defiantly Modernist and rational; the arrangement of its large beautiful ponds and the stately pillars, lined with golden mosaic tiles, create a composition of the highest order. Meanwhile, the distinctive blue roof - a folded plate that filters light into the main prayer hall - was influenced by the traditional paper parasols once ubiquitous on the streets of the city.

Surrounded by the greenery of the Lake Gardens, this singular building remains a grand statement of what Malaysia aspires to be: open, innovative, connected to its roots and a heavenly home for all.

The Dayabumi Complex arrives by 1984 next to the transport hub of Pasar Seni and the old city centre. This elegant white tower is one of the first monumental buildings designed by homegrown talents at MAA Arkitek and BEP Architects.

The generous use of glass, so ubiquitous in Modernist architecture, created challenges in a hot, tropical setting. Dayabumi’s response was to search for inspiration from Arab-Persian vernacular designs, specifically the draping of the whole tower in geometric screens, known as mashrabiya, which shade the glass wall from the sun. Aesthetically, this functional choice also complemented the Islamic elements incorporated throughout the building, such as the eight-pointed star pattern and the archway at the entrance.

Dayabumi, along with contemporary projects designed by local architects, such as the Tabung Haji building whose form is based on a customary Malay drum, illustrates the shift in thinking from Modernism’s total rejection of tradition and adherence to strict rules of form and functionality. Serious questions about identity in architecture began to be addressed, heralding the Postmodern era, where vernaculars, culture and tradition returned with a vengeance. 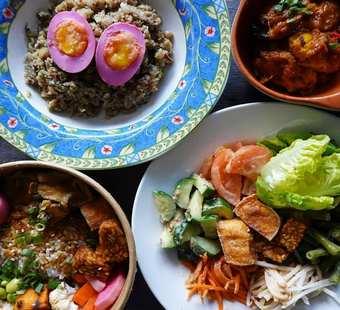